Michael Powell
For 91 Days we lived in Tokyo, the world’s biggest city, and it went by in a flash. There’s no way to experience everything this mega-city has to offer, but we made a good go of it! Whether you’re planning your own journey to Tokyo, or are just interested in seeing what makes it such a special place, our articles and photographs might help you out. Start at the beginning of our adventures, visit our comprehensive index to find something specific, or choose one of the articles selected at random, below:
Showing #1 - 10 of 101 Articles 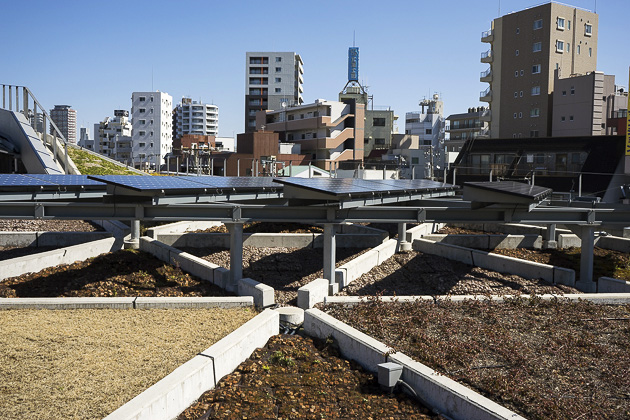 "Tokyo." The word has always sent shivers down my spine. Tokyo isn't just any big, exciting city. It's the biggest and most exciting city in the world. The thought that we were about to spend three months there filled me with both happy anticipation and a sense of dread. 91 days is usually enough time to comprehensively explore our new homes, but this wouldn't be the case in Tokyo. And we knew it. 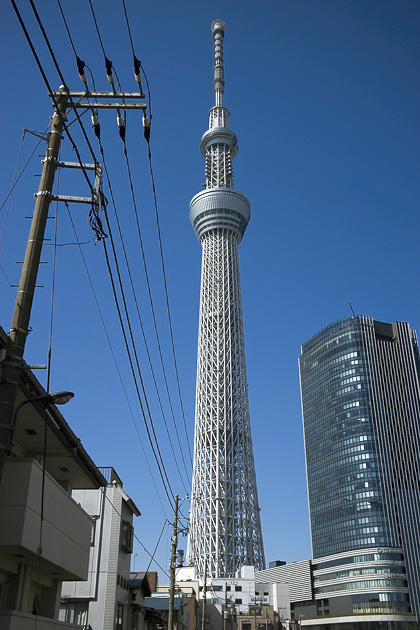 The Tokyo SkyTree and Solamachi Mall

After arriving in a new city, we often try and find a panoramic viewpoint for a bird's eye view of our new home. So our first activity in Tokyo was destined to be the SkyTree which, at 634 meters, is the world's tallest tower. 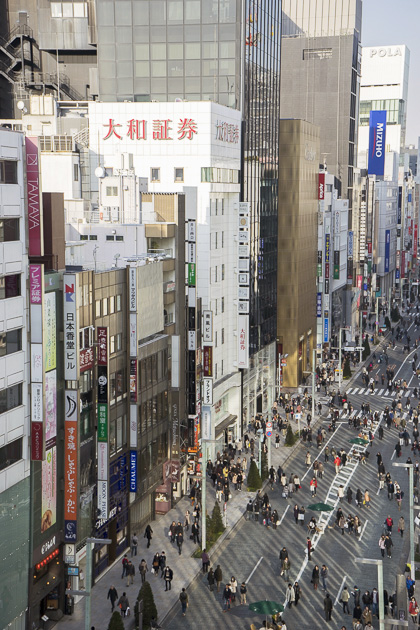 Ever since springing to life in the seventeenth century as home to the city's silver-coin mint, the central district of Ginza has been among Tokyo's most popular places to shop, see and be seen. We spent our first Saturday in the city walking along the joyfully car-free street of Chuo-Dori, watching people, and popping into some world-famous stores. 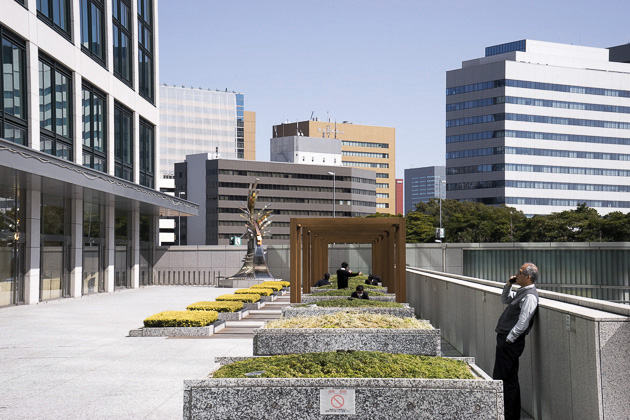 Shiodome, the onetime railway center of Tokyo, has blossomed into one of the city's most modern and important financial districts. We spent a day wandering around its skyscrapers, like ants in the presence of giants. 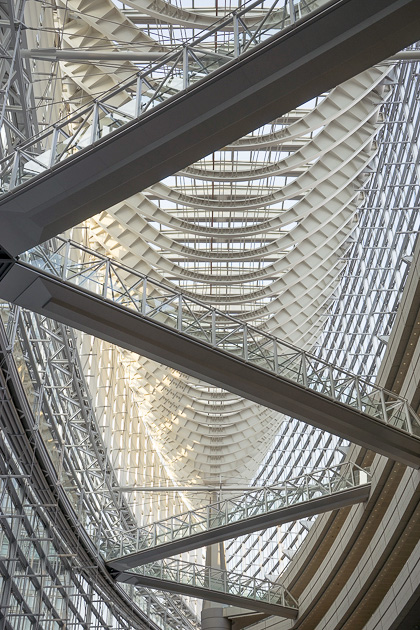 Built in 1997 by Argentine-American architect Raphael Viñoly, the Tokyo International Forum is found in the center of the city, next to Tokyo Station. The spacious exhibition hall stretches across four buildings connected by a curving glass roof. Steel, glass, sharp angles and plenty of light make the complex ideal for a photographer. 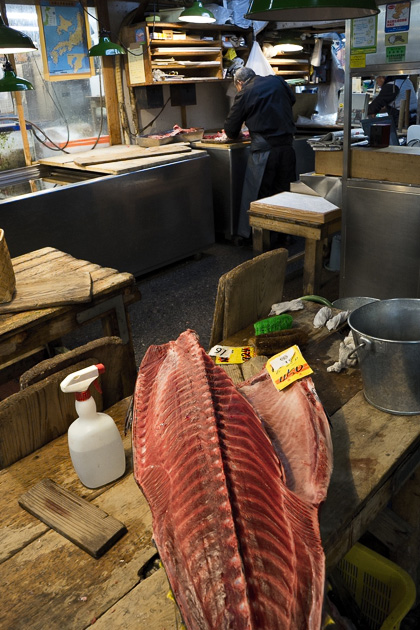 With over 60,000 employees and billions of dollars in yearly commerce, Tsukiji is the biggest fish market in the world. The action begins every morning at 3am, as shipments of fresh and frozen fish from around the world arrive over land and sea. 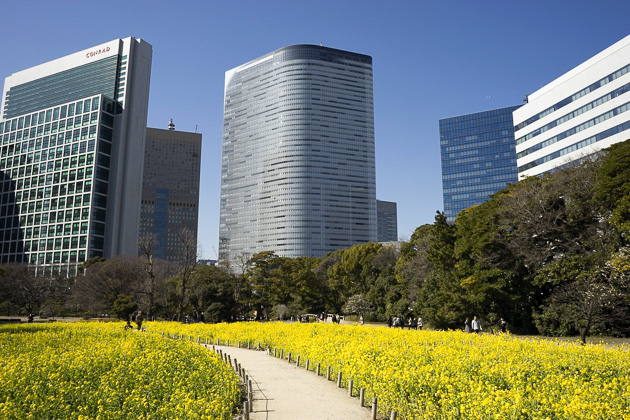 A green oasis floating atop the murky waters of Tokyo Bay, the Hamarikyu Detached Palace Gardens will transport you to the days of the Shogun, as long as you manage to keep your eyes focused on the duck ponds and cherry trees, instead of the impenetrable row of skyscrapers on the horizon. 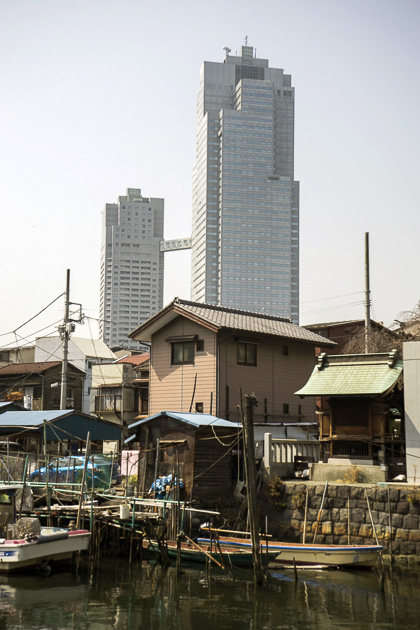 The Fisher Village of Tsukishima

Ever since the artificial island of Tsukishima was created in the middle of the Tokyo Bay in 1892, its western coast has been home to city fishermen and their families. Completely ringed in by canals, it feels nothing like the rest of Tokyo, with quiet lanes instead of busy boulevards, two-story houses instead of steel skyscrapers, and a sleepy sense of small-town tranquility instead of the exhausting bustle of perpetual commerce. 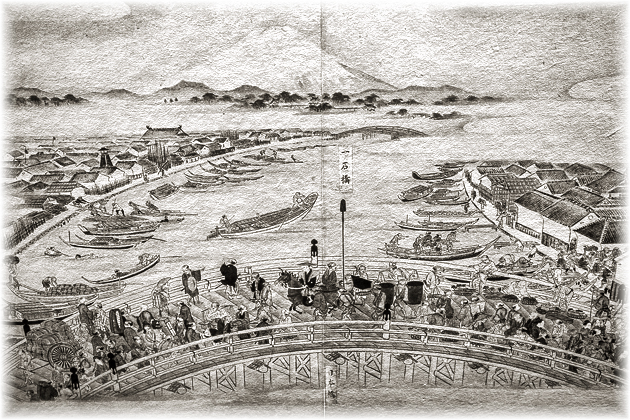 A Concise History of Tokyo

Unlike many of the places we've visited, Tokyo doesn't have a history which stretches far into the past. In fact, before the close of the nineteenth century, Tokyo didn't even exist; it was known instead as Edo. But the rapid ascension from village to "World's Biggest City" has been as catastrophic as it has been meteoric. Growing pains are always the hardest for those who mature too quickly. 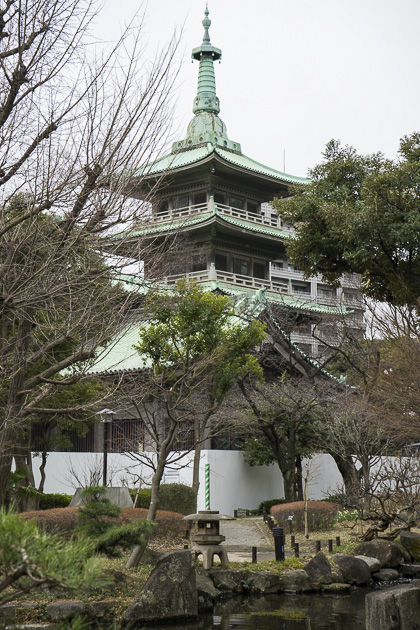 On September 1st, 1923, Tokyo was struck by the most devastating earthquake in its history. Seventy percent of the city's housing was destroyed and over 140,000 people lost their lives during the quake, as well as in the subsequent fires which raged uncontrollably through the streets.
Next Page